Atherosclerosis [ath-er-o-skler-O-sis] is a disease in which plaque [plak] builds up inside your
arteries. Arteries are blood vessels that carry oxygen-rich blood to your heart and other parts of your body. 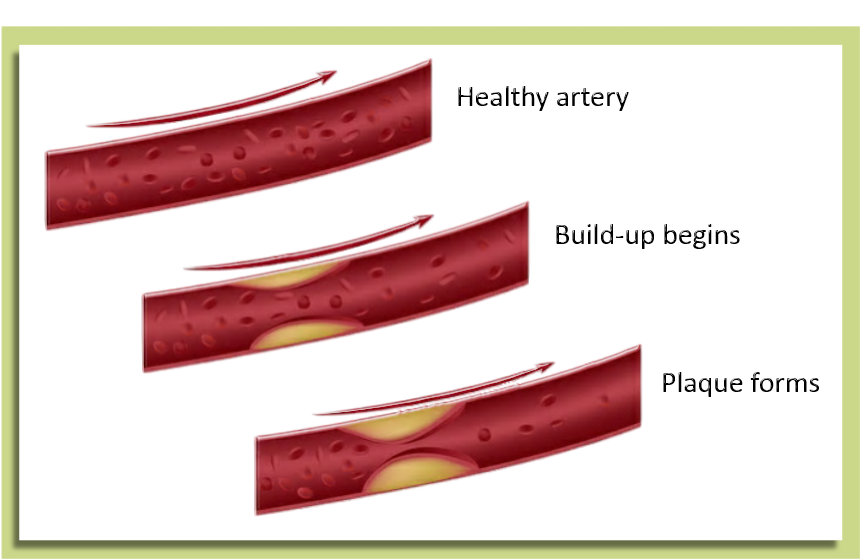 Plaque is made up of fat, cholesterol, calcium, and other substances found in the blood. Over time, plaque hardens and narrows your arteries. This limits the flow of oxygen-rich blood to your organs and other parts of your body.

What is heart disease?

Heart disease, also called cardiovascular disease and coronary heart disease – is a simple term used to describe several problems related to plaque buildup in the walls of the arteries, or atherosclerosis. As the plaque builds up, the arteries narrow, making it more difficult for blood to flow and creating a risk for heart attack or stroke.

What is a blood clot?

Blood clots form to help prevent leaking when you break the surface of the skin — for example, when you cut your finger chopping carrots or on a piece of broken glass. Your body goes through a certain series of events to make sure that you do not bleed to death. 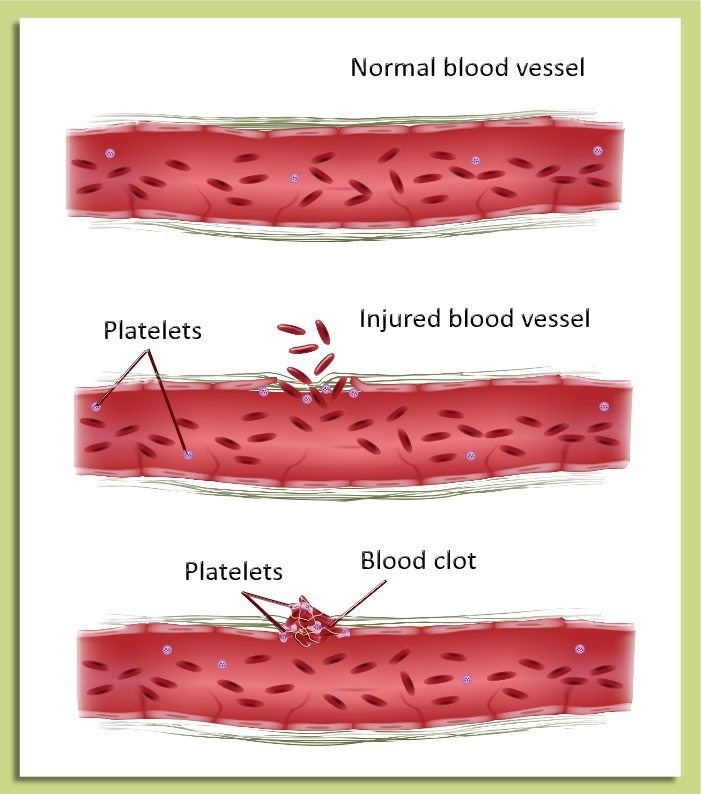 Once the platelet plug is formed, a chain of events is initiated to form a clot. The reactions that occur are catalyzed by enzymes called clotting factors. There are 12 clotting factors, and the mechanism that occurs is very complex.

Here are just a few highlights of what happens during the clotting process:
• After a platelet plug forms, the coagulation phase begins, which involves a cascade of enzyme activations that lead to the conversion of prothrombin to thrombin. Calcium is required for this reaction to occur.
• Thrombin itself acts as an enzyme and causes fibrinogen — one of the two major plasma proteins — to form long fibrin threads.
• Fibrin threads entwine the platelet plug forming a mesh-like framework for a clot.
• The framework traps red blood cells that flow toward it, forming a clot. Because red blood cells are tangled in the meshwork, clots appear to be red. As the red blood cells trapped on the outside dry out, the color turns a brownish red, and a scab forms.

Cholesterol [ko-LES-ter-ol] is a waxy, fat-like substance that’s found in all cells of the body. Your body needs some cholesterol to make hormones, vitamin D,and substances that help you digest foods. 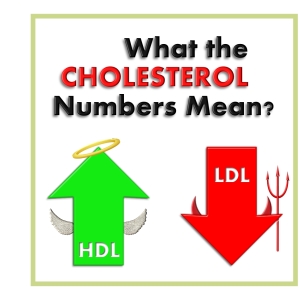 Your body makes all the cholesterol it needs. However, cholesterol also is found in some of the foods you eat.

High blood cholesterol is a condition in which you have too much cholesterol in your blood. By itself, the condition usually has no signs or symptoms. Thus, many people don’t know that their cholesterol levels are too high.

Coronary heart disease is a condition in which plaque [plak] builds up inside the coronary (heart) arteries. Plaque is made up of cholesterol, fat, calcium, and other substances found in the blood. When plaque builds up in the arteries, the condition is called atherosclerosis [ATH-er-o-skler-O-sis].

What is an ultrasound scan?

An ultrasound scan is a very common test, it is painless and uses sound waves to create images of organs and structures inside our body. 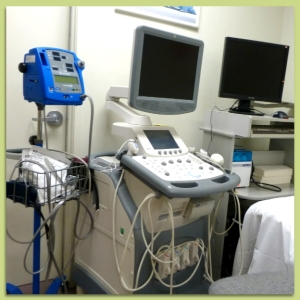 The images are produced when the sound waves are directed into the body then reflected back to a scanner that measures them and convert to images.

Specific body structure will reflect different sound waves which will be picked up by the scanner. Since sound waves are measured in frequency, different kind of scanner will be used for the various part of the body due to the difference in the structure.
Moreover, these sound waves can even assess moving structures, like blood moving through a vessel.

What is a clinical trial?

Clinical trials are essential to the development of new interventions (treatments and or test). Without clinical trials there is no other way to properly determine whether new medicines developed in the laboratory or by using animal models are effective or safe, or whether a diagnostic test works properly in a living human body. 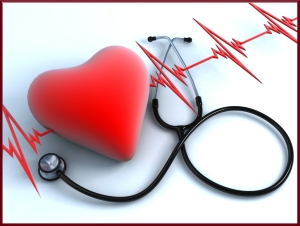 The importance of clinical trials to the advancement of modern medicine cannot be overstated. Clinical trials partner scientists, patients, and academia or industry in a journey that may improve medical treatments and, in some cases, lead to spectacular medical breakthroughs.

What is blood pressure? 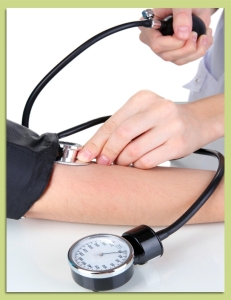 These measurement are written one before or above the other, with the systolic number before or on top and the diastolic number after or on the bottom.

A stroke or “brain attack” occurs when a blood clot blocks an artery (a blood vessel that carries blood from the heart to the body) or a blood vessel (a tube through which the blood moves through the body) breaks, interrupting blood flow to an area of the brain.  When either of these things happen, brain cells begin to die and brain damage occurs.

When brain cells die during a stroke, abilities controlled by that area of the brain are lost.  These abilities include speech, movement and memory.  How a stroke patient is affected depends on where the stroke occurs in the brain and how much the brain is damaged.

What is Alzheimer's disease?

Alzheimer’s disease is the most common form of dementia that causes problems with memory, thinking and behavior. There is no cure and is an irreversible, progressive brain disease that slowly destroys memory and thinking skills and, eventually even the ability to carry out the simplest tasks of daily living. The symptoms usually develop slowly and get worse over time.

Alzheimer’s disease is the most common cause of dementia among older people, and it is not a normal part of aging. 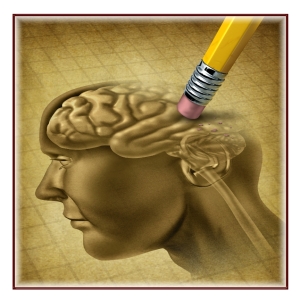 The disease is named after Dr. Alois Alzheimer. In 1906, Dr. Alzheimer noticed changes in the brain tissue of a woman who had died of an unusual mental illness. Her symptoms included memory loss, language problems, and unpredictable behavior. After she died, he examined her brain and found many abnormal clumps (now called amyloid plaques) and tangled bundles of fibers (now called neurofibrillary tangles).
Plaques and tangles in the brain are two of the main features of Alzheimer’s disease. The third is the loss of connections between nerve cells (neurons) in the brain.

Alzheimer’s is the sixth leading cause of death in the United States. Those with Alzheimer’s live an average of eight years after their symptoms become noticeable to others, but survival can range from four to 20 years, depending on age and other health conditions.

Although treatment can help manage symptoms in some people, currently there is no cure for this devastating disease.

Dementia is the loss of cognitive functioning—thinking, remembering, and reasoning—and behavioral abilities to such an extent that it interferes with a person’s daily life and activities. Dementia ranges in severity from the mildest stage, when it is just beginning to affect a person’s functioning, to the most severe stage, when the person must depend completely on others for basic activities of daily living. The most common form of dementia is Alzheimer’s disease, which counts for approximately 75% of dementia. 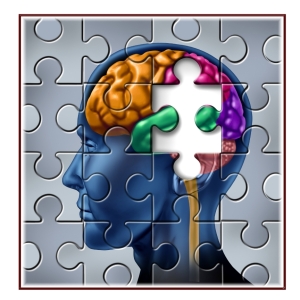 Many conditions and diseases cause dementia. Two of the most common causes of dementia in older people are Alzheimer’s disease and vascular dementia, which is caused by a series of strokes or changes in the brain’s blood supply.
Other conditions that may cause memory loss or dementia include:
• medication side effects
• chronic alcoholism
• tumors or infections in the brain
• blood clots in the brain
• vitamin B12 deficiency
• some thyroid, kidney, or liver disorders

Many of these conditions are temporary and reversible, but they can be serious and should be treated by a doctor as soon as possible.

Emotional problems, such as stress, anxiety, or depression, can make a person more forgetful and can be mistaken for dementia.

Estrogen is one of the major female hormones which include estrone, estradiol and estriol. In spite of estrogen and testosterone being present in both sexes, estrogen is considered to be the “female” hormone while testosterone as the “male” hormone.

Estrogen hormones play an essential role in the growth and development of female secondary sexual characteristics such as breasts, pubic and armpit hair, endometrium, regulation of the menstrual cycle and the reproductive system. During the menstrual cycle, estrogen acts to produce an environment suitable for fertilization, implantation, and nutrition of the early embryo.

Fibrinolysis is a process that occurs inside the body to break down thrombus (blood clots). This prevents blood clots from remaining in place and growing and allows the body to clear fragments of clots safely to avoid risks such as strokes and damage to the heart that can be caused by big floating clots. 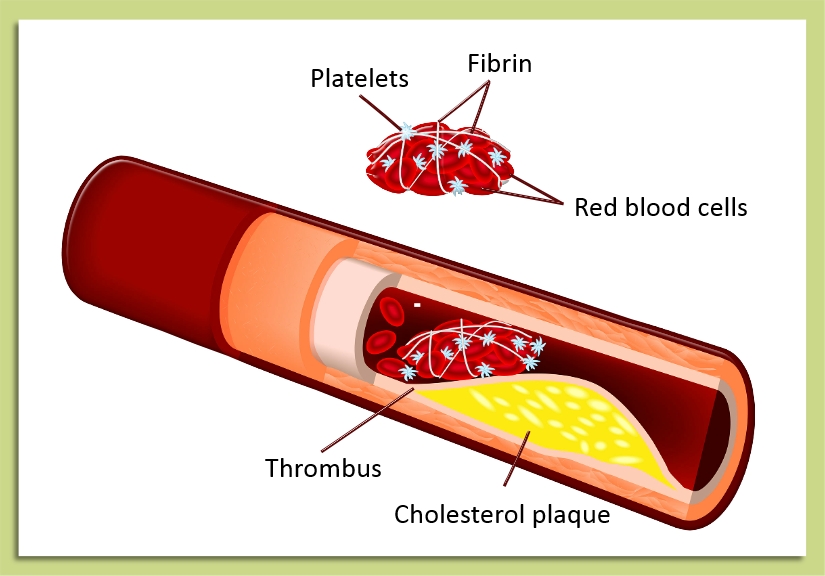 Primary fibrinolysis occurs naturally as the body clears clots that are no longer necessary once the underlying tissue is healed. Secondary fibrinolysis can be induced with medications or occur as the result of stress or disease.

When blood clots, it forms around a matrix of fibrin, a protein that is released during coagulation. The fibrin creates a framework for blood to clot around for the purpose of sealing a hole or covering a wound. Left in place, however, the clot could lead to the development of problems. In fibrinolysis, an enzyme called plasmin cuts through the fibrin to break the clot apart into smaller pieces that can be expelled by the body.

The precursor to plasmin, plasminogen, is produced in the liver. When blood starts to clot, plasminogen is locked inside the clot along with an activator that can turn the plasminogen into plasmin. As healing progresses, the activator is released to create plasmin to break up the clot. The body can also use inhibitors that interfere either with the action of the activator or the plasmin to slow fibrinolysis. This keeps the breakup of blood clots in balance.

Fibrinolytic agents are the compounds that breakdown the fibrin inside the clot but not the thrombus (blood clot) itself.

Thrombosis is the formation of a blood clot within a blood vessel which can cause a partial or total obstruction of the blood flow trough the circulatory system. 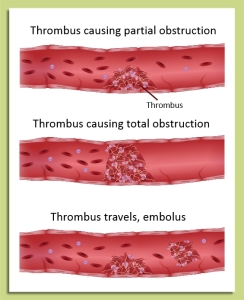 Under normal condition, blood clot forms when blood vessels are injured preventing blood loss. death. Blood clots can form under certain conditions even when a blood vessel is not injured.

When thrombus are partially or completely detached from the blood vessel walls can cause embolism to the vital organs such as heart, lungs, brain or arteries in the legs. As the free thrombus travels through the circulatory system it can obstruct blood flowing and life threatening conditions such as heart attack, pulmonary embolism, stroke or limb-gangrene.

Thrombolytic agents are compounds that break down the thrombus (blood clot) itself.