The Biochemistry laboratory in under the direction of Dr. Vijay Kalra Ph.D., and it is focused on cell signaling, and role of transcription factors and microRNAs in transcriptional and post-transcriptional regulation of genes involved in inflammation, pulmonary hypertension, diabetes and atherosclerosis, Alzheimer’s disease and sickle cell disease. 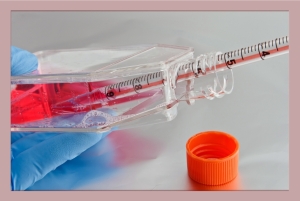 Specifically, the lab is interested in determining how vascular endothelial cells that line the blood vessel become activated in response to circulating cells e.g. red blood cells and white blood cells, and circulating factors such as high blood sugar levels in diabetics, increased iron overload due to increased red blood cell formation in anemic patients such as Sickle Cell Anemia, and tangled amyloid fibrils in Alzheimer Disease. Once the lining of the blood vessel becomes activated, it expresses new receptors to which blood cells can bind and slow the flow of blood in circulation. As a consequence oxygen delivery to the blood vessel, due to blockage or impediment in the flow of blood, occurs leading to activation of transcription factors such as hypoxia inducible factor and NF-kappaB, which leads to more inflammation and expression of molecules like endothelin-1 (constricts blood vessel), tissue factor and plasminogen activator inhibitor-1(increased fibrosis). Based on these studies the lab has identified small molecules, which inactivate specific transcription factors in the cell signaling pathways, and prevent inflammation and pulmonary hypertension in mice model of sickle cell disease. Since these small molecules are already FDA approved for lowering lipid levels, these molecules have potential in attenuating inflammation and pulmonary hypertension in sickle patients.

In our earlier studies, we have had shown active constituent of turmeric, a yellow component of Indian Curry i.e. Curcumin, inhibited inflammation mediated by tangled amyloid fibrils, present in brain of Alzheimer’s patient.

Epidemiological studies have shown the incidence of Alzheimer Disease is low in Indian population compared to Western world, as the former routinely use curry powder in their cooking. Thus, turmeric, a natural product has potential in inhibiting inflammation in various pathological diseases such as cardiovascular disease, stroke and dementia.

The list of Dr. Kalra’s publications can be found on PubMed.